Systematic reviews and meta-analyses of the impact of cigarette pack warnings have found strengthened warnings increased attention to warnings, recall of warnings, thinking about the health risks of smoking, motivation to quit smoking,  knowledge, and quitline calls. Strengthening warning also led to reductions in smoking behavior.

However, in the Caribbean only Jamaica (2014) and Suriname (2014) have taken steps to actually implement warnings in 2014. The Cayman Islands, which fall under United Kingdom jurisdiction, also moved towards implementation.

The remaining Caribbean countries, while signatories to the FCTC, have yet to seriously take steps to implementing much  of guidelines outlines in the Framework.

When you’re Jamaica’s Ministry of Health and you want to get the message out about the Zika virus what do you do? You turn to reggae music. In ‘We Nuh Want Zik V’, one of the most catchy Zika PSAs available, obstetrician and gynecologist Michael Abrahams, energetically encourages people on how to keep dangerous mosquitoes away from their home.

Did you make a New Year’s resolution to be healthy? You’re not alone.

One of the most talked about mages of the past few weeks is not from a health campaign but from a weight loss company. Weight Watchers launched a new campaign with Oprah Winfrey a few weeks ago, and since then the deeply personal and emotional tone of the ad got many people talking.

Did Oprah’s personal message and resolution make you think about your own life? Did it prompt you to take action on your diet and exercise? Celebrity influence on public health is not new. Studies have shown major  behavior changes after the public hears about a celebrity or public figure’s health issues.

I am curious to see what effect, if any, Oprah’s new ad has on people both in the United States and beyond. This is especially timely because the Caribbean region right now is plagued by high rates of diabetes and other non-communicable diseases.

I was browsing through the Healthy Caribbean Coalition website recently and click on their Tobacco Control section. I’m involved in a research project looking at the effectiveness of cigarette warning labels globally so tobacco control is of increasing interest to me. 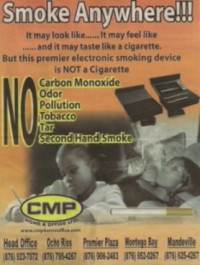 At the top of HCC’s Tobacco Control page was a “Response to e-cigarette promotion in Jamaica” by three members of the Jamaica Coalition for Tobacco Control. The columns were written back in 2010 and are quite insightful. You can read them here, here, and here.

These types of public advocacy (media advocacy) are important part of the health communication mix. This got me thinking about what has happened since then. Who else has written about e-cigarette advertisements in the region?

I’d also love to see communication-oriented research on how/whether these kinds of media advocacy has any real effect on policies and laws in the region, which in turn may affect behavior.

To engage with this topic, leave a comment below.

Remember, we can also be found here:

One of the many challenges with having a blog about health communication in the Caribbean region is that I am not exposed to as much information about the region as I would like. I live in Durham, NC and am completing my Ph.D. at the University of North Carolina at Chapel Hill. Suffice to say, I am very much not in the Caribbean.

I have Google Alerts. I try to browse as many online newspapers as I can. When I see something, I want to find out more. But that can be difficult. Very few times have I seen links within articles that could lead me to the organization or issue that is being written about. And online searches rarely turn up anything, especially for smaller islands.

I listen to radio from my native Dominica as well as what I can from the U.S. Virgin Islands so I occasionally catch public service announcements (PSA) about a health or environmental issue. If the PSA is produced by Population Services International (PSI) or similar large organization with deep roots in the region then I might be able to find information for it online. More often than not, the audio or video is not online so there may be nothing to link to.

Lack of access to what’s going on makes it hard to keep up with the many excellent programs that the region has to offer. And, I’m sure many of those programs are community-based and never even make it to the mediascape.

One of the things I would like to do is develop a list of people who are working in health promotion, marketing, public relations, health communication, the nursing/medical field etc. in the region. This work could be in any capacity.

So, if you or someone you know is doing work that could be of interest to the Caribbean health blog community, do let us know.

Also, if you have a health program that you would like us to write about, send us an email as well.

Remember, we can also be found here: