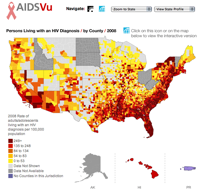 I’m always intrigued by the intersection of new media/new technology and public health. And this past week, leading to the 30th anniversary of the first reports AIDS case, Emory University unveiled a new website: AIDSVu.org. Using data from local HIV testing sites, county, state and national HIV data, the website shows an interactive map of the United States with county-level HIV rates for adults/adolescents per 100,000.

One weakness of the site is that there is no information for Puerto Rico and the U.S. Virgin Islands. However, there is hope that the site will include such information at a later date. Additionally, the interactive map has potential to be a global resource with the inclusion of surveillance data from across the Caribbean and the world. My health communication professor at the University of Southern California espoused the importance of data representation for public health and healthcare. Seeing this website, I am better able to understand why he strongly believes that any data communicated should be done in such a way that is not only informative but that can be easily digested by the lay public.

So, what’s the importance of this map for Caribbean audiences? It’s important because one can look at the map to see where Caribbean populations live and try to extrapolate the rate of HIV in that area. As the website noted, caution should be taken when interpreting this map because it included the prison populations–reported at the country level–which may increase the rate on that county. Nevertheless, the ability of the map to communicate the who and where people are affected in there.

What do you think of this interactive tool? How else can this technology be used?